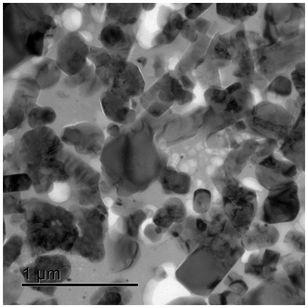 Building Habitable Worlds
This project aims to answer fundamental questions about the (1) initial mineralogy of the solar system and (2) understand how those materials came together to form habitable planets.

(1) Some meteorites come from asteroids that have remained dormant throughout their history and preserve the very dust that was once swirling around the newly forming Sun. We are characterising the mineralogy of the most pristine meteorites at the nano-scale. By investigating the relationship between minerals and organic matter, we aim to constrain the first stages of accretion, and explore how these minerals relate to dust seen in interstellar space and protoplanetary disks around young stars.

(2) In the last decade new computer models and the discovery of exoplanets have shown that solar systems are dramatically shaped by giant planet migration. The inward and outward migration of Jupiter and Saturn caused turbulence and widespread mixing of materials from the inner and outer regions of our own solar system. We are identifying evidence of this transport and mixing in the meteorite record and using this to understand the dynamic history of the solar system and learn about the diversity of materials available in the protoplanetary disk. (PI, UKRI Future Leaders Fellowship) 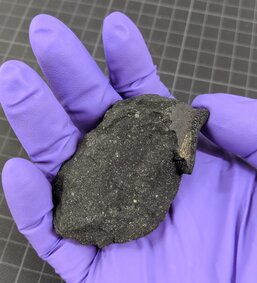 Geological History of Water-rich Asteroids
Water plays a critical role in the formation and evolution of planets – it drives plate tectonics, supports atmospheres, and is considered an essential ingredient for life. Water is present throughout the inner (<2 AU) solar system, but its origin in this region continues to be debated. A leading hypothesis suggests that water was delivered to the terrestrial planets by asteroids originating in the outer (>5 AU) parts of the solar system.

The aqueously altered CI and CM carbonaceous chondrite meteorites are samples of water-rich asteroids, offering a direct probe into the geochemical and geophysical characteristics of volatile reservoirs in the solar system. In this project we are investigating the geological history of water-rich asteroids using an approach that combines mineralogical and chemical observations of CI and CM meteorites with low temperature hydrothermal alteration experiments that replicate asteroid environments. By studying CI and CM meteorites, we are learning how water has shaped primitive asteroids over the last ~4.56 billion years, providing a better understanding of the nature, distribution and transport of volatile species in the early solar system. (Researcher Co-I, STFC grant no. ST/R000727/1) 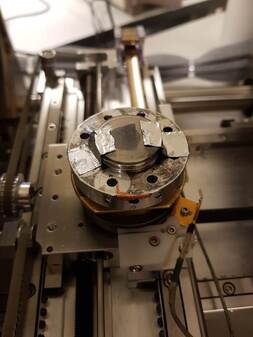 Laboratory Analysis of Returned Extraterrestrial Materials
To date space missions have collected and returned to Earth samples of the Moon (Apollo/Luna), from low Earth orbit (e.g. LDEF), the solar wind (Genesis), a comet (Stardust), and a stony asteroid (Hayabusa). Returned extraterrestrial materials offer context for our meteorite collection, ground-truth astronomical and remote observations, and can be studied in unparalleled detail in the laboratory, leading to ground-breaking discoveries about planet formation that are not possible through in-situ spacecraft measurements alone. Furthermore, returned samples become available for the technology and scientific questions of the future. I was a member of the NASA Stardust Interstellar Preliminary Examination Team that first analysed contemporary interstellar dust, and I am currently a member of the JAXA Hayabusa2 Mineralogy and Petrology Team set to analyse samples returned from the carbonaceous asteroid Ryugu in December 2020. 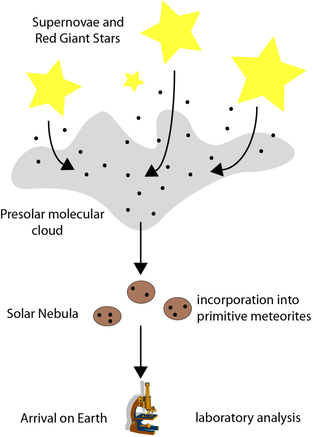 Presolar Materials
The protoplanetary disk contained dust and gas synthesised in the atmospheres of ancient stars. A small fraction of this “presolar” dust survived the formation of planetesimals and can be found in primitive meteorites. Identified by isotopic compositions that vary by orders-of-magnitude from solar values, presolar grains of SiC, graphite, oxides and silicates can be used to trace the physical and chemical conditions in stellar environments, the interstellar medium and the early solar system.

Presolar SiC grains were first extracted from meteorites using harsh acid dissolution techniques. However, evidence that these treatments may alter grain surfaces led to the development of non-acid isolation methods to obtain “pristine” SiC. Early studies showed that many of the pristine grains have thin (<100 nm), possibly organic, amorphous coatings never previously observed on acid extracted grains. These coatings could be remnants of organic mantles that formed when simple ices (e.g. water, carbon monoxide and carbon dioxide) deposited onto grain surfaces were processed via photolysis and sublimation in the cold interstellar medium or outer regions of the protoplanetary disk. The nature and origin of the coatings on pristine presolar SiC grains remains unknown but they potentially offer a crucial link between organic materials observed in interstellar space and those present at the start of the solar system.